As part of Dying Matters Awareness Week, I have asked a couple of people in the Funeral and Bereavement industry to come and guest blog on my site. The first of my guests is John Adams of Perry and Phillips Funeral Directors in Shropshire.

I first met John and his family two years ago at the National Association of Funeral Directors (NAFD) AGM. John was with his Dad, Chris and sister, Katie and we had a lengthy conversation about child bereavement. I was there to promote Love Will Never Die and child bereavement is something the family feel passionately about supporting.

Here is John explaining why:

“As a 12 year boy, I sat around the kitchen table, I was given the stool from behind the cupboard, and listened as my Dad the ‘funeral arranger’ navigated through the arrangements with my late Mum’s family, including my now late Gran. Looking back at the arrangements it was not a discussion, it was a terrifying reality for my Mum’s family. My Gran was obviously mortified at the loss of her 39-year-old Daughter, my Mum’s side of the family had always been a very close unit. My Mum’s closest friends were her sisters. Reflecting on that time, being given the stool from behind the cupboard speaks volumes, I was there, but I wasn’t. 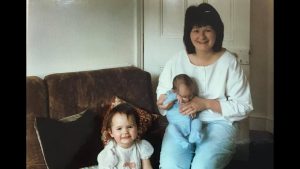 Eventually after not being able to ‘get a word in’, I put my hand up to speak. When all the family stopped talking and looked at me, they asked ‘what is it?’. I asked could I have a word as she was my Mum, when I asked about having ‘Let It Be’ by the Beatles in church, it was suggested that it would be better to be played at the reception as they don’t really play those songs in church. I left the table and went up to my room very upset.

Looking back on this time it is still sad. It upsets me more thinking what it could have been. The most peace I found during all that time was going to see my Mum in the Chapel of Rest under the support and honest words of my Dad. Just her and I, finally, amongst all the madness.

At 12 years of age, your world is pretty small, your immediate family are your life. I find it fascinating how we still try and protect, or hide things away from younger people when it comes to death. Surely, they need more communication and patience than ever before?

Since re-joining my Family Funeral service, I do naturally gravitate towards children when they lose a parent. I recently went to a family home in the early hours to look after a young lady, similar age to my Mum. She was also part of a big family with lots of upset extended members present when we arrived. My initial thought process was to get that immediate family unit together, provide calmness and clarity. In a separate room, I explained to the children and their Dad that their Mum is still theirs, when she leaves here today, she doesn’t become ours, the Funeral Directors, she’s always yours. You as a family unit have full control and we are here to support you and guide you in every single aspect.

Going into funeral arrangements is always going to be difficult, especially when children are involved in those discussions. However, I know at first hand, experiencing the loss of my Mum, and what I do now as a Funeral Director, how special and powerful this time can be and younger members of a family will remember it forever.”

Thank you to John for sharing this incredibly sad part of his life. I can’t imagine that was easy. Although sad, it was so interesting to hear where John’s passion came from and how much he wants to help children going through the same thing.

I’ve met a lot of people in the funeral industry who have got into their role because of an experience similar to John’s. It’s driven them to want to help others and is possibly why the industry is one of the nicest you could ever wish to work in.