I met Elke a few years ago at a conference she was speaking at. Her story had such an impact on me that she’s stayed in mind ever since. When I decided to run a series of guest blogs from people I work with or admire, Elke came to mind immediately.

She has a new book due out this month which explains cancer to younger children in a way they can understand. Here is her story of where the book came from:

“You must feel invincible now that you’ve survived cancer…”

…said someone to me after my active treatment finished in November 2012. I honestly can’t remember who it was. But the truth is: I don’t. I feel shaken and bruised and scared and grateful and happy and guilty, and everything else in between. But I most definitely do not feel invincible…

To give you a bit of a bigger picture: In April 2009, my 34-year-old husband Martin died suddenly from a cardiac arrest, four days before our daughter’s first birthday, and whilst away with our three-year-old son. No family history, no previous symptoms. I was literally speaking to him on the phone at 9:30 in the morning, saying “I’ll see you later”, and by half past eleven, he was dead.

From one minute to the next, I was a young widow with two kids under four, trying to explain why Daddy couldn’t ever come back. Olivia was obviously too young to communicate verbally, but Alex asked lots and lots of questions – including “Mummy, will you have to die?” – “Yes, Alex, everybody has to die. But most people won’t die until they are very old.” – followed instantly by: “And who will look after me when you die?”

Naively – back then! – I thought that, ‘just’ because my husband had died, I was somehow safe. That my kids couldn’t be that unlucky twice. Somehow, I took it for granted that I would live to a ripe old age and that nothing bad would happen to me.

But, of course, that’s not how it works…

Less than three years later I found myself lying in a small room at the Breast Clinic at the Western General Hospital in Edinburgh, waiting for the radiographer to get to the bottom of the lump I had found in my breast, and happily chatting away with the lovely nurses. I had come by myself, quietly cursing this ‘waste of time’ when I should be working, because the kids were at nursery and school, and I genuinely wasn’t that worried. After all, I’d had lumps before, I’d even been here at the Breast Clinic before, and everything had always been fine.

But this time, when the image of the inside of my breast popped up on screen, the mood in the room changed instantly. Everyone fell silent. Everyone stared at the screen. The radiographer zoomed in and squinted at the picture. Tried different angles. Moved closer to get a better look. I started to worry. “Is this cancer?” I asked. Silence. “Could this be cancer?”, I asked again, this time more urgently. The radiographer didn’t take her eyes off the screen. “I don’t know,” she finally said. “It’s on the list, but it’s not top of the list. We’ll need to do biopsies.”

Biopsies. I couldn’t take it in. I was only meant to be here for half an hour. Was meant to just get up again, happy in the knowledge that everything was fine. Was meant to go pick up my daughter from nursery, and worry about what to have for lunch. Instead, I was lying here, boob out, feeling scared and dizzy. One silent tear rolled down my cheek, and I whispered: “I can’t die. My kids are only three and six, and their daddy is already dead.” 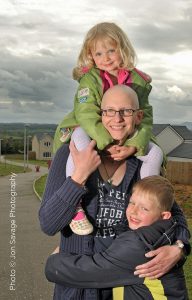 A week later I had my definitive diagnosis: an aggressive, hormone-receptive breast cancer, which would require chemotherapy, surgery, radiotherapy, and hormone treatment for years to come. I was 37. Once again, I had to have some difficult conversations with my kids, as well as my five step daughters, who had been part of our lives since I started dating their dad, John, 13 months after Martin had died.

Right from the start, I promised my children that I would always be honest with them; that they could ask me anything, no matter how awkward or difficult the question, and that they would always get a straight answer. And, luckily, they did have the courage to ask. Back then, it was things like: “How many more sleeps until I have to die Mummy?”, and “What happened to Daddy’s body?”, and now: “If you have breast cancer, does that mean you will die, Mummy?”

I believe that, if a child is old enough to ask a question, they are old enough to hear the answer. And by that I don’t mean we give them every single scary detail, but I do mean we need to be honest. We need to find the best version of the truth, and somehow bring it across in a way they can understand. So I told them that there was a chance that I could die from this breast cancer, yes. But that the doctors had explained that there are lots of different types of medicine and treatments that would hopefully make me better again. And that many people survive breast cancer. I told them about chemotherapy, how all my hair would fall out, and how I would probably feel really sick and tired and grumpy for a while. So when all of this happened, it didn’t come as a shock to the kids, and they were okay about it. When I say ‘okay’, I don’t mean that it was always easy, or that they didn’t worry. Of course they worried, and of course there were bad days, and difficult questions, and hiccups in the treatment, but, crucially, the kids had the courage to ask and to talk. To admit to themselves and to others, that everything was not okay right now. But that THAT was okay in itself. That life isn’t always smooth or easy or happy. And somehow, we made it through. I remember feeling so relieved when I could finally tell them that the treatment had worked. That I was okay again. But the first question out of Alex’s mouth was: “Can you get cancer twice, Mummy?”

I smiled. Of course it wasn’t going to be this easy. I looked at him, and said: “Yes, Alex. You can get cancer twice. But I also know lots of people who have survived it twice.”

So, no, I don’t feel invincible. But I do feel grateful. Grateful for finding the cancer when it was still treatable. Grateful for this second chance, which has helped me live a happier, more authentic life. Grateful for the many difficult, but wonderful, bonding conversations I have had with my children. But I also feel intense sadness – for everyone who wasn’t this lucky. For everyone who didn’t survive cancer.

And I still feel bruised, and scared and happy and everything else in between…

Elke Thompson is a self-employed children’s book author, speaker, graphic designer, and occasional blogger, and has written “Is Daddy Coming Back in a Minute?” and “What Happened to Daddy’s Body?” under the name Elke Barber.

Her new book “Is it still ok to have cuddles?”, which explains breast cancer in words very young children can understand, is out this month.

She is currently working on her next book “Is it still ok to be happy?”, which explains living with, and dying from, incurable cancer in word very young children can understand, and hopes to have it out by the beginning to the middle of 2022.

You can find out more on: www.elkethompson.com